… In the du Maurier novel, the woman narrator is certainly jealous because her husband, Maxim de Winter, seems to have loved his first wife Rebecca more than he loves her, his new bride. But Rebecca is a good example of how hard it is to distinguish jealousy from envy; since Rebecca herself is dead, one could argue that the narrator merely envies the qualities of beauty and gaiety people are always telling her Rebecca had. Jealousy is so nuanced that we have no words for some of its twists, for example the emotion the narrator probably feels when she learns of Rebecca’s violent fate. … 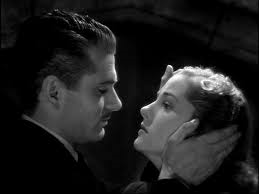 For a long time the author was described as a romantic novelist, but her stories seldom feature a conventional happy ending: they were dark, often gothic and tense novels and short stories, with overtones of the paranormal. Critics say she was a complex and very interesting person:  both Rebecca  – brave, strong, loving the outdoors, walking, riding, sailing and so on, and also the second Mrs de Winter – shy, unsure of herself, hiding herself away.

Rebecca‘s narrative takes the form of a flashback. The unnamed narrator, a naïve young woman in her early 20s, lives in Europe with her husband, sheltering recollections of a beautiful home called Manderley, which has been destroyed by fire.

The story begins when she recollects her first meeting with Maxim in Monte Carlo, years before.

While working as the travelling companion to a rich American woman she meets the wealthy Englishman, Maxim de Winter, a widower aged 42. After only a few weeks, they get married and go to live in his mansion in Cornwall, the beautiful estate of Manderley. But a dark cloud hangs over their marriage: Maxim’s first wife, Rebecca, who drowned in a boating accident  the previous year.  Her presence still haunts Manderley, where Rebecca’s devoted housekeeper, the sinister Mrs. Danvers, frightens and intimidates her new mistress. The heroine feels that she can never compare favourably to Rebecca, who was beautiful, talented, and brilliant–or so everyone says- and still maintains a grip on her husband.

At the annual costume ball. Mrs. Danvers manipulates the girl into wearing a replica of the dress shown in a portrait, but she doesn’t tell her that it was worn by Rebecca at her last ball.

Seeing her, Maxim is horrified, and she becomes more and more convinced that he will never love her, since he is still devoted to Rebecca.

Shortly after the ball, Mrs. Danvers reveals her contempt for the heroine and attempts to take revenge by encouraging her to commit suicide by jumping out of the window.

However, she is refrained at the last moment by the disturbance caused by a nearby shipwreck. A diver investigating the scene of the accident discovers also the remains of Rebecca’s boat, with her body still on board. This discovery prompts Maxim to tell the heroine the truth: Rebecca was a malevolent, wicked woman, who lived a secret life and had numerous love affairs.

On the night of her death, Maxim had demanded a divorce, and she had refused, and told him that she was pregnant with another man’s child. Furious, he seized a gun and shot her, and then sailed out to the harbour in Rebecca’s boat and sank it, with the dead body inside.

This revelation re-establishes their marriage, but soon after Rebecca’s lover  attempts to blackmail Maxim saying he has proof that his deceased wife did not kill herself, and accuses Maxim of the crime.

The local magistrate investigates, and finds that, on the day of her death, Rebecca went to London to see a Doctor Baker. The heroine is afraid that Baker will reveal that Rebecca was pregnant, but instead, when they find him in London, it turns out that Rebecca was dying of cancer.  Her terminal illness supplies a motive for Rebecca’s supposed suicide, and, at the same time, Maxim assumes that Rebecca, knowing that she was going to die, manipulated him into killing her quickly.

The couple drive all night back to Manderley but before coming in sight of the house, they perceive  a glow on the horizon and realize the mansion is in flames.