Some are teethed on a silver spoon,

With the stars strung for a rattle;

I cut my teeth as the black racoon–

For implements of battle.

Some are swaddled in silk and down,

And heralded by a star;

They swathed my limbs in a sackcloth gown

On a night that was black as tar.

For some, godfather and goddame

The opulent fairies be;

Dame Poverty gave me my name,

For I was born on Saturday–

“Bad time for planting a seed,”

Was all my father had to say,

And, “One mouth more to feed.”

Death cut the strings that gave me life,

And handed me to Sorrow,

The only kind of middle wife

My folks could beg or borrow.

Countee Cullen (1903 –1946), was an African-American poet, author and scholar who was a leading figure in the Harlem Renaissance. When the woman who had reared him (after his mother had abandoned him) died, he was adopted, by Reverend Cullen of Harlem, New York City, the local minister, and founder, of the Salem Methodist Episcopal Church. His real mother did not contact him until he became famous in the 1920s.

He started writing poetry in his early high school years; when he reached college he started receiving awards.

He published some volumes  of poetry, promoted the work of other black writers, and, in the last years of his life, wrote mostly for the theatre. Since his  death, Cullen has been admired as one of the greatest African American writers of his time.

Since the beginning, the author states that rich   babies receive a  privileged treatment, unlike his poor  experience, to describe which he uses the adjective “black” twice in the first two stanzas.   Black symbolically is negative while white is positive, and even  when the concept  does not refer to black and white skin, it  emotionally carries  the weight of oppression.

Throughout the stanzas, the  continuous contrast between the  life of well off and of a poor children implies that the author resented the fact the his being African American caused his life to be harder.

In the first line the speaker alludes to an  old maxim, “born with a silver spoon in his mouth,”  meaning  to be born into a wealthy family, and changes it into “Some are teethed on a silver spoon.”.  Wealth is  further stressed by the fact that  those new-borns have “the stars strung for a rattle”,  rich elaborate toys, while  his unhappy condition is emphasized through the use of personification, such as “Poverty”, “Pain”, “Death”, and “Sorrow”.

He describes himself as a seed planted  during a difficult  time,    ”handed to sorrow” when he lost his parents, (The strings that gave me life), since it  was the only person able to raise him. He identifies his day of birth as just “Saturday” , to show its unimportance and lack of celebration, alluding  to the Mother Goose nursery rhyme, “Monday’s Child,”

Monday’s child is fair of face,

Tuesday’s child is full of grace;

Wednesday’s child is full of woe,

Thursday’s child has far to go;

Friday’s child is loving and giving,

But the child that is born on the Sabbath day

Is bonny and blithe, and good and gay. 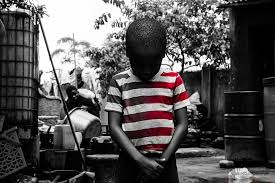