Allied is a 2016 romantic thriller film directed by Robert Zemeckis, starring Brad Pitt as Max Vatan ,a Canadian intelligence officer and Marion Cotillard as Marianne Beausejour, a French Resistance fighter and collaborator, who fall in love during a deadly mission behind enemy lines in North Africa in 1942. 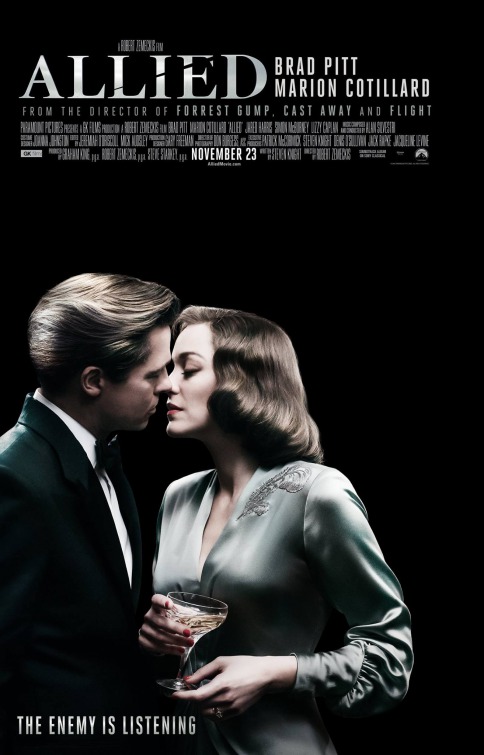 Royal Canadian Air Force intelligence officer Max Vatan descends into the desert with his parachute, walks a few miles, is picked up by a driver and taken to Casablanca in French Morocco: he has been engaged to kill the German ambassador

He is partnered with Marianne Beauséjour, who has escaped from France after her resistance group was compromised and killed, and is to play the role of his wife. They both agree that in their kind of work feelings can get people killed, but during the few days they spend together they fall in love with each other.

Marianne, who is trusted by the Germans, secures Max an invitation to a reception where they plan to conduct the assassination. The two meet with the ambassador who invites Max to the party, but he pretends he would rather play poker. The diplomat challenges him to split a deck of cards saying that, if he gets the low card, he will have to go to the party. Max expertly shuffles the deck and luckily picks the lower card, the result he desired.

They continue preparing for their operation, including target practice, and pretending to be husband and wife. Max resists Marianne’s advances for a while until they have sex in a car in the middle of a sandstorm. knowing that they might not survive

The difficult mission is successful and they manage to escape. Max then asks Marianne to join him in London and be his wife. The two get married, settle down in Hampstead, and have a baby girl named Anna, who was born in the hospital courtyard during a bombing raid.

After a year, Max and Marianne have grown accustomed to their life as a family. But, one day, Max is summoned for a meeting with his commander officer Frank Heslop and a secret service agent who tells them that Marianne is suspected of being a German spy, having adopted her identity after the real Marianne was killed in France. He is also told that the German ambassador they killed was a dissident and Hitler wanted him dead.

In order to test their suspicions, the officer orders Max to conduct a test of Marianne’s loyalty, a Blue Dye operation, or both of them will be shot. Max is ordered to write down a fake order at home, where Marianne can find it: if the information is picked up from intercepted German transmissions, Max must personally kill her, otherwise they will be both executed.
Max is infuriated that they question his wife’s loyalty, but agrees to cooperate, until he decides to investigate the truth on his own.

Defying orders, he visits a former colleague who knew Marianne, to show him her photo, but the man, on a wheelchair and with the face horribly disfigured from his wounds is now blind and cannot confirm Marianne’s identity. However he refers him to another man who may have the answers he seeks: a resistance fighter in France.

Max orders a young pilot flying a clandestine mission to supply Resistance fighters in France to find that man , show him a photo and try to assess Marianne’s identity. But the young pilot, while waiting on the ground for the answer, is killed.

Meanwhile Max and Marianne hold a party, and they invite colleagues and friends. Among the guests, Max notices an unknown man talking to his wife, but Marianne tells him he is a local jeweller who was trying to sell her a brooch.

The party goes on and the house is full of people, with several of them getting intimate in various corners. During the party, an air raid occurs and Max and Marianne get terribly worried, especially as regards their daughter’s safety.

That night, Max takes the place of a young pilot and flies to France to meet with that resistance fighter, who is held at the local police station owing to his drunkenness .

Some resistance members help him reach the jail, but the operation is unsuccessful: there is a shooting and the only thing Max is able to obtain from the drunkard is that Marianne was a talented pianist who had once played the French Marseilles on the piano in a wonderful way right in front of the Germans.

Max returns to England, takes Marianne to a local pub and tells her to play the piano. After hesitating, Marianne closes the piano, as she knows what this is about. She admits she is a spy and she has forwarded the Blue Dye message which Max left in plain view. Anyway, she claims her feelings for Max are genuine and that she has acted as a spy only because she and her child were being threatened by German spies in London, including Anna’s babysitter.

Therefore Max, unwilling to execute his wife , plans to take Marianne and Anna away and kills the babysitter and the jeweller who were involved with Marianne’s business as a spy. Having cut ties, they go to an airfield but Max cannot get the plane to start before the arrival of the military police and his commander officer Frank who is preparing to arrest him for treason.

Marianne, who is still inside their car, wraps up Anna in a blanket, gently sets her down in the backseat and takes a revolver from the glove compartment. She gets out of the car and tells Max she loves him and to take care of Anna, then she turns her back and shoots herself in the head. Max takes his jacket off and covers her body, while Frank orders the other soldiers to report that it was Max who executed Marianne by his own hand, so that he will not be punished.

In the final scene, we see Marianne writing a letter for Anna to read when she is older, expressing her love, and the ranch in Medicine Hat, Canada, the one that Max has always dreamt of, where he and his daughter have moved after the war.